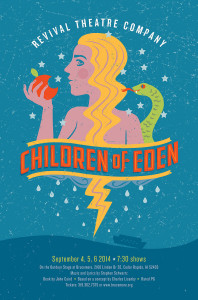 Anna Neumann, daughter of Jen and Doug Neumann, will be a part of the cast for the in the production of Children of Eden, which will kick-off the Revival Theatre Company’s  inaugural season in the estate’s natural amphitheater–September 4, 5, and 6 at 7:30 p.m.

Based on the book by John Caird, and a concept by Charles Lisanby, Children of Eden was originally developed for the Royal Shakespeare Company. Inspired by the Book of Genesis, Children of Eden tells two major biblical stories, that of creation and the flood. With music and lyrics by Stephen Schwartz, the lyricist and composer of Wicked and Godspell, Children of Eden is a joyous and inspirational musical about parents, children, and faith…not to mention centuries of unresolved family business.

Advance tickets are $20 for adults and $18 for Brucemore members and students.  All tickets at the gate are $25.  Tickets are nonrefundable.  Parking is available on-site.  Audiences are encouraged to bring lawn chairs, blankets, picnics, and beverages.

More information is available at http://revivaltheatrecompany.com.

We need your stories and notes! If your committee meeting time is missing or there is an idea to share with the rest of the congregation, please send them to secretary@hope-ucc.org or call the church office at (319) 393-2400.

Submissions for the next edition are due by the 20th of the month.