Advent Season: A Time for Reflection, Preparation, Waiting and Wondering

Advent is a season observed in many Western Christian churches as a time of expectant waiting and preparation for the celebration of the birth of Jesus at Christmas. The term is a version of the Latin word meaning “coming”. Latin adventus is the translation of the Greek word parousia, commonly used to refer to the second coming of Christ.

For Christians, the season of Advent anticipates the coming of Christ from two different perspectives. The season offers the opportunity to share in the ancient longing for the coming of the Messiah, and to be alert for his Second Coming.

Practices associated with Advent include keeping an Advent calendar, the lighting of candles as part of an Advent wreath, praying an Advent daily devotional, as well as other ways of preparing for Christmas, such as setting up Christmas decorations, a custom that is sometimes done liturgically, through a The Hanging of the Greens.

Meaning Associated with the Advent Candles

The Advent wreath is a circular garland of evergreen branches representing eternity. On that wreath, five candles are typically arranged. During the season of Advent one candle on the wreath is lit each Sunday as a part of the Advent services.

On the first Sunday of Advent, the first purple candle is lit. This candle is typically called the “Prophecy Candle” in remembrance of the prophets, primarily Isaiah, who foretold the birth of Christ. This candle represents hope or expectation in anticipation of the coming Messiah.

Each week on Sunday, an additional candle is lit. On the second Sunday of Advent, the second purple candle is lit. This candle typically represents love. Some traditions call this the “Bethlehem Candle,” symbolizing Christ’s manger.

On the third Sunday of Advent the pink, or rose-colored candle, is lit. This pink candle is customarily called the “Shepherds Candle” and it represents joy.

The fourth and last purple candle, oftentimes called the “Angles’ Candle,” represents peace and is lit on the fourth Sunday of Advent. 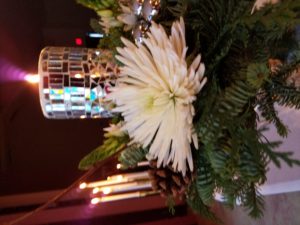 On Christmas Eve, the white center candle is traditionally lit. This candle is called the “Christ Candle” and represents the life of Christ that has come into the world.

We need your stories and notes! If your committee meeting time is missing or there is an idea to share with the rest of the congregation, please send them to secretary@hope-ucc.org or call the church office at (319) 393-2400.

Submissions for the next edition are due by the 20th of the month.